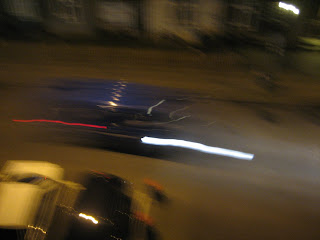 The Danish Security Intelligence Service (PET) arrested several people in Copenhagen’s Noerrebro district early this morning, who are suspected of planning to carry out a bomb attack. As of yet, it is still unclear whether or not the attack was to take place in Denmark or elsewhere.

Most reports are repeating the same thing, that it isn’t yet clear whether or not the cordoned off area is related to the recent arrest of the suspected terrorists, or a part of the police operation against the anarchists raging in the streets of the same area.

I happened to be in Copenhagen during the riots of last March. I recall seeing hundreds of policemen in the streets, cars burning in the distance, and finding it very difficult to get to sleep with all the sirens and police vans racing through the streets. (picture taken from my hotel window around 2:00am)

It’s much too early to “guess the religion” of the perpetrators, but I do recall that there are “other recent incidents” where Muslim males in Denmark were involved in either acts of incitement or acts of terrorism. *L* KGS

Update: “Suspected terrorists” of the following ethnic persuasions have been picked up in the latest anti-terror raid, Afghan, Pakistani, Somali and Turkish. Six of the eight were Danish citizens, the remaining two were foreign nationals. The Baron has it here.