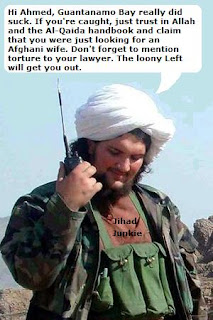 At least 30 ex-inmates released from Guantanamo Bay –having returned to a life of jihad– have been either killed or captured on the battlefield against western allied forces. These “Jihadist Junkies” make a mockery of the claims that depict these terrorists as being helpless innocent victims of “western imperialism”.

They’re dedicated and highly trained in the art of deception, proving that any such detainees shouldn’t be just …”let loose”.

“Commander Jeffrey Gordon said the detainees had, while in custody, falsely claimed to be farmers, truck drivers, cooks, small-arms merchants, low-level combatants or had offered other false explanations for being in Afghanistan. We are aware of dozens of cases where they have returned to militant activities, participated in anti-US propaganda or engaged in other activities,” said Commander Gordon.


His comments follow the death this week of Taliban commander and former detainee Abdullah Mehsud (pictured), who reportedly blew himself up rather than surrender to Pakistani forces. In December 2001, Mehsud was captured in Afghanistan and held at Guantanamo Bay until his release in March 2004. He later became the Taliban chief for South Waziristan.”

Jihad to an Islamist is like heroin to an addict, being too powerful and tempting of an elixir to put down. Let’s hope common sense wins the day in what to do with these prisoners, just trusting in their word has proven to be not the wisest of remedies. More here. *L* KGS

Via LGF, “Good work, lefties. How many people have died because of your bleeding-heart crusade to get the jihadis at Guantanamo released?”