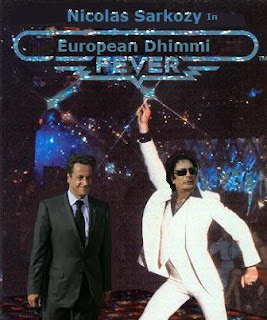 French President, Nicolas Sarkozy’s visit with Libya’s leader Moammar Gaddafi –who interrupted his John Travolta look-alike contest for the visiting head of state– has caused a lot of worry, with his intention to export nuclear technology to the (still Stalinist) Libyan state.

How can anyone seriously entertain the idea that “it would be a good thing for Libya to have a nuclear industry”? Well the French president most certainly does.

“If we dare to say that civilian nuclear energy is reserved for the northern coast of the Mediterranean and that the Arab world is not responsible enough for nuclear energy, then we are humiliating them and paving the way for a war of civilizations,”

“In what universe does it make sense to say, “We need to trust their peaceful intentions, or they’ll declare war on us?”

Amazingly clear and to the point. Any government that does not answer to its people, and engages in international extortion on a grand scale, is obviously not the right candidate for sharing nuclear technology with. I mean, the US just got the Libyans to divest themselves from their clandestine nuclear weapons program, what is the logic and common sense behind the rush to dump the technology back into their laps?

Fjordman has more at the Gates of Vienna. Its plain for all to see that Europe’s leaders are just enthralled with the idea of falling over backwards in appeasement to the Arab world. Dhimmis are as Dhimmis do. *L* KGS

The Sheik has more on the aftermath of the Franco-Libya deal, with Gaddafi calling on the Arab League to sever all ties with Bulgaria.