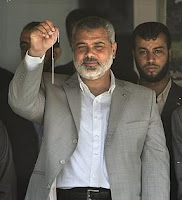 The direction of Gordon Brown’s “new vision“ is amazingly clear, appeasement and dhimmitude. There is no other way to interpret this move, other than a return to business as usual for the drifting, clueless Left.

“British parliamentarians on Monday softened their demands for negotiating with Hamas and said that while it is critical for the group to renounce violence, it does not necessarily need to recognize Israel for preliminary contact to be established with the European Union, The Jerusalem Post has learned.

In a report to be published on Tuesday, a subcommittee of the House of Lords’ European Union Committee said that the EU should avoid an “undesirably rigid” approach to dealing with Hamas that would risk undermining progress in building viable and democratic Palestinian institutions, a prerequisite, they say, for any peace settlement.

Still, in the report, entitled “The EU and the Middle East Peace Process,” the committee asserts the EU is “right” to require Hamas to renounce violence, recognize Israel and accept existing agreements.

This is nothing more than a regurgitation of the same old European nonsense, that refuses to hold Palestinian extremists accountable for their words and actions. According to these Euro “soft heads”, Islamic KKK’ers shouldn’t be pushed too hard, because it would pose risks to Palestinian institutions —that would be built on the intolerance of their racist supremacist agenda— and their new democracy. What puke.

What a conflicted bunch. On the one hand the Brits admit that it’s right for the EU to demand the Hamas to recognize Israel, but then proceed to give legitimacy to their intransigence vis-a-vis the Jewish state. Morons. More here. *L* KGS

Note: While Britain’s new PM decides to soften the British stance towards Hamas, a sub-committee report cites “Northern Ireland as a “positive source of inspiration”. Though the comparison seems tempting, Hamas is most definitely not the IRA. Click here and here for why.