256 Palestinian prisoners loyal to Fattah have been released this morning by Israel. In a move that is to supposedly bolster the approval rating of PA President, Mahmoud Abbas, Israeli PM, Ehud Olmert is swinging open the jailhouse doors and allowing convicted criminals to walk out.

Israel is also taking off their wanted list, the names of any Al-Aksa Martyr’s Brigades member that turns in his weapon and signs a pledge not to engage in any more terrorist activity against Israel. But here’s the rub, those terrorists pictured in the signing ceremony have already laughed off the deal as a joke.

“This is all a big joke,” they told reporters while posing for pictures. “Abbas asked us to sign a declaration saying we won’t attack Israel and so we are.”

“And why not? The Palestinian Authority Chairman agreed to pay them thousands of dollars in exchange for the photo opportunities. There is also the non-financial incentive. In exchange for their propaganda photos and their signatures on declarations not to engage in terror anymore, Israel has pledged to take these murderers off of its wanted list. So just for participating in a satire, these men get to walk without fear for the first time in years.” More here.

This is nothing more than Déjà vu, with terrorists agreeing to Israeli demands that they have no intention of honoring. Like a horse and pony show, the terrorists stand for their pictures to be taken, make their insincere promises, then trot away. How many more lives will be lost because of this deal is a question that can only be answered in the future.

Debbie Schlussel has more on it here. Fattah cannot be trusted to enforce any discipline on their men, when the majority of its members are hooked on the murder of Israelis. This is the real Fattah, which is no different from Hamas, perhaps just minus their overt Islamism. *L* KGS

Schlussel: “Remember this picture, below? Those were Fatah’s bloody hands–bloody from handy work at ripping apart Israeli soldiers alive–to the cheers of Fatah’s patriots beneath the window.” 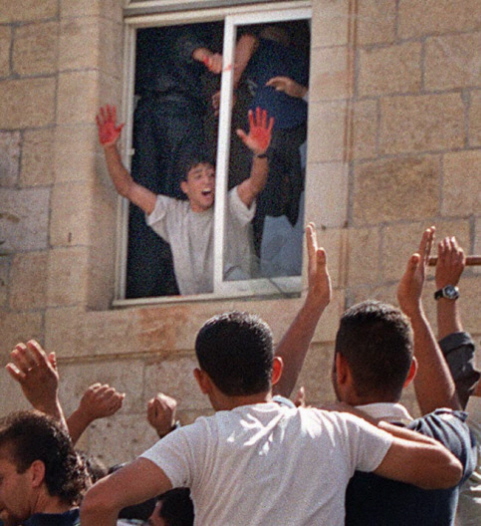 David Hornik has more reasons as to why these fiends (those on the run, and those just released) should not be given a “free pass”. Unrepentant and “hooked on violence”, it’s not a question of if, but when they’ll return to planning terrorism against Israelis.

TINSC adds: There is only one way to spin it, the US made them do it. They SAY it bolsters Abbas, but there’s no real reason to think so. It only makes it look like he’s collaborating with the US and Israel. That only makes Hamas MORE popular.”