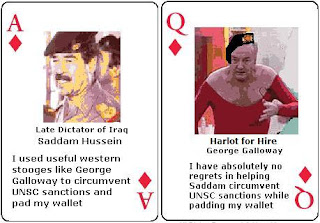 The ever loathsome Respect Disrespect MP, George Galloway, faces a suspension from the British House of Commons for his role in accepting bribes from the former dictator of Iraq, saddam Hussein.

“The Commons Standards and Privileges Committee, in one of its most damning reports against an MP, said today that Mr Galloway at best “turned a blind eye” to what was going on but was more likely to have been “complicit” in the concealment of the true source of funds for his Mariam Appeal.”

The disgraceful Galloway only faces a 12 day suspension for being on Saddam’s payroll. Powerline has a quote from Galloway that only serves to underline his role in helping Hussein skirt UNSC sanctions, in the the now infamous Oil-for-Food Scandal.

Galloway in 2002: “Finally, may I say that our work has been going on for years and I believe that Your Excellency is aware of the results which we have achieved. Mr Tariq Aziz has helped us with his contacts and has used his influence to facilitate our job and facilitate the mechanism by which we have been able to obtain the funding necessary to finance our activities. But, we are now suffering from the problem of the price of oil which has resulted in a reduction in our income and delay in receiving our dues.”

What a sleaze ball, this guy at least deserves to be barred from politics, in a just world, he should be sitting in jail. More here. *L* KGS