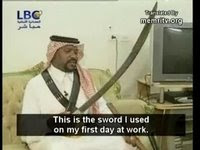 Perhaps very soon, Saudi state executioner, Abdullah Al-Bishi will be back in “swinging action”, in separating the skull from the neck of a maid from Sri Lanka, nineteen year old Rizana Nafeek.

“Beheading has always been the punishment for murderers, rapists, drug traffickers and armed robbers in Saudi Arabia, which follows a strict interpretation of Islamic law. In February, four Sri Lankan workers were executed for armed robbery and their headless bodies left on public display in Riyadh, triggering harsh criticism from international rights groups.”

Eh, conveniently missing from the above article is the inclusion of both adultery and being a non-Muslim caught in either Medina or Mecca, as well as being an apostate from Islam, as crimes worthy of capital punishment. According to the Saudis: “Rizana Nafeek admitted strangling the four-month-old boy while feeding him with a bottle.” The woman was not hired to take care of a new born, and still maintains her innocence, claiming that:

“the child had begun to choke before losing consciousness in spite of her desperate efforts to clear his airway.”

That the poor woman was even denied council, speaks rather loudly of what kind of justice is in the Kingdom of Saud. More here. *L* KGS