Nothing has changed since the death of Mickey Moussa, the Hamas terror rat called “Farfour”. Palestinian Media Watch records the latest broadcast on Hamas TV, in which

“young viewers, who phoned into the show, expressed their views to the child host, Saraa’ and demonstrated how well they have absorbed the violent lessons of the show and possibly children’s programming. One young caller proclaimed:

“Awake oh children, awake to action, your destiny is one, and it is to become a Shahid [Martyr] for Allah.”

Later in the show, a nine-year old girl paraphrased the Hadith (Islamic tradition attributed to Muhammad) that has been broadcast numerous times by Fatah and Hamas religious and educational leaders – that the Hour (of resurrection) is dependent on Muslims’ fighting and killing the Jews.”

It’s very disturbing to see children openly manipulated by adults, whose aims are to instill a perpetual cycle of hatred and violence towards Jews. This kind of flagrant child abuse has been given a free pass by many in the news media. When will it ever become the focus of a campaign to stop it? What’s next…? *L* KGS 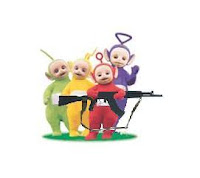