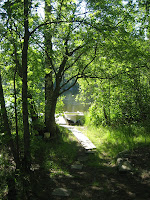 The Tundra Tabloids takes a break for the weekend, and dedicates this week’s last post to guest blogger, Kumitonttu. Happy Juhannus Päivää to all my Finnish readers. *L* KGS

In case Muslims want to understand Western values, they have to accept individuality. They have to accept man’s right to live his life the way he wants. I remember as a kid living in country side, how strong influence power (Lutherian) church had. I personally was probably the first minor to leave the church, and the local preach and teachers practically haunted me. I was oppressed in a way I cannot understand in the 21st century. The main problem when talking about human conflicts is always based on what we believe, not what can be scientifically proved.

If we want to understand the Muslims, we have to realise they live hundreds of years “behind” the Western countries, but are able to utilize modern weapons. It has to be understood, that the Muslims are unable to get out of the strait by themselves. We may help or isolate them.
If we decide to help them we must have a strict principle, that they are not welcome to our society if bring the strict religious “laws” with them. Those who are unable to meet the demands, have to be – by decades – supported at their homelands financially to build a culture, which tolerates and desires scientific “truths”. I am sure that we have less to lose than they have. We will be hit far less than the Muslim world.
Socialists consider a man can control his behaviour completely. We all know empirically it is not true. There is no possibility to “World without borders” way of life – that is against human nature. We may wish and hope that would come true, but how often have you seen a socialistic society succeed? They are welcome to the West if they accept our values – we don’t expect them to believe in our God, just respect our values. If I wanted to move to Gaza, accepting the values would not be enough, I should also believe in their god.
Some corners were cut, but I assume the point is taken. Kumitonttu