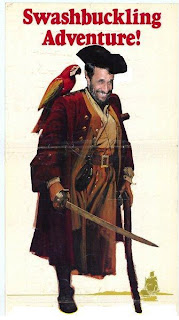 Iran is once again involved in another swashbuckling adventure, this time it involves three Finnish employees of Nokia Siemens Networks (based in Dubai) who were on a fishing trip at the time of their abduction off the coast of the United Arab Emirate.

“Finnish authorities have not been allowed to speak to the men. However, “Iranian officials say the Finns are in no danger and are being treated well,” says Pasi Tuominen, a senior official of the Foreign Ministry. “We don’t know at this moment what their status is.”

According to Esa Hutrig, Chargé d’affairs at the Finnish Embassy:

“Normally these are not very big things,” “This kind of accident happens to fishermen very often…Accidents happen.”

Update: Possibly soon to be released? “A representative of the Iranian Embassy in Helsinki told YLE Wednesday afternoon that the three men who were taken into custody on Saturday will be released as a gesture of goodwill.”

So it’ll be a gesture of “good will”, not from any normal common sense and decency.

Update: The three Finns were released today. Arghh,… all other fisherman beware!

Note: I received this some what after the fact, but it’s useful to see that the Iranians actually admitting that they snatched the poor guys who where out for an afternoon of fun and fish. Thanks Blazing Cat Fur.