Over at the Gates of Vienna, the Baron posted an email from an Israeli doctor who writes:

I am writing to you from Jerusalem, Israel. I have a suggestion how to impress upon the readers of your blogs the essence of the complete insanity of the Israeli defense policy. Compare the distances from one point to another in two different reference systems.In other words: take a map showing the distance from, for example, Gaza City or any population center in Gaza, to the City of Sderot.Then take a map of where you live, with identical distances.

I view the doctor’s suggestion to compare distances to be compelling enough, so I’ll do the same for Finland. Hopefully the Finns that visit the Tundra Tabloids, can somehow imagine what it’s like for the citizens of Israel –who live in Sderot and Ashkelon– to live under the constant threat of being hit by Kassem rockets.

First of all, here is a map showing Gaza and the range of the various rockets Palestinian terrorists are firing at Israeli public centers of Sderot and Ashkelon. 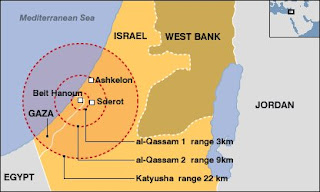 The distance that these Kassems can travel is between 3 to 9 kilometers, which covers the areas of both Sderot and Ashkelon. Here is a video showing what it is like to be in the vicinity when one of these rockets hit.

The blast from the rocket knocked the cameraman taking the video to the ground as the Kassem hit a neighbor’s house. One of the family members was injured in the attack. These rockets have little or no military use, their only purpose is to cause panic and mayhem and murder if someone happens to be in the wrong place at the wrong time. This is clearly a war crime and the Finnish media has thus far neglected to report it as such.

Now take a look at the city of Helsinki:

If there were Kassems being launched from the island of Lauttasaari, the whole of Helsinki would fall under their deadly umbrella. I have circled key areas of importance to bring home the “impact” of such a scenario.

The Helsinki Central Train Station, the famous Kiasma Museum, the Finnish House of Parliament and the Finlandia Talo could all be potential targets, as well as the Olympic Stadium and the Hartwell Arena, scene of the recent Eurovision song competion hosted in Helsinki last week.

These rockets have a devestating effect on the Israeli population and are a war crime, what would the response of the Finnish government be if their civilian centers were under a constant barrage of fire? The attack on Sderot is an “export” of internal conflict in the Palestinian society.

It is important to understand that the Israeli government has shown restraint in the last two months, but the last four days, in which Israeli civilians are being attacked on a daily basis with missiles from the Gaza strip – a place that Israel left in order to give the Palestinians the possibility to create a normal life and not to attack.”

What would any other government do under similar circumstances? I doubt seriously that they would tolerate it, instead, they would take measures against the Kassem fire in order to ensure the safety of their citizens. For the most part, the whole Kassem scenario has been kept off the Finnish media’s radar screens, only when Israel has reacted do they begin to take notice. *L* KGS