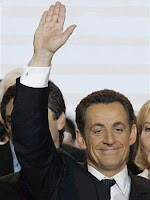 One must not mistake Sarkozy’s family heritage as being the grounds for a new beginning in France’s relationship with Israel, his first and foremost policies concentrate on domestic issues. Also, France’s foreign policies are dictated solely (like all states) from their own self interests. That said, it will be interesting to see if a new breath of realism will begin to take shape in France’s foreign policy vis-a-vis Israel.

Perhaps the illogical attitudes and policies that drove French policy during the past 30 years in regards to Israel, will be somewhat amended or changed. Zarkozy has said in the past during last year’s war with Lebanon that “Israel has a right to self defence” as well as recently in the Jerusalem Post.

“Only if Israel is guaranteed that its existence will not be threatened and the Palestinians are allowed to form a viable state can we achieve a durable and viable solution.” “I defend the right of Israel to protect itself against external aggression, particularly when it takes the form of blind and cowardly acts of terrorism,” he declared. “But the measures taken must not condemn the search for a negotiated peace settlement. They must be appropriate and proportional.” Then there is the statements by officials close to Sarkozy who go on to elaborate even further:

“When there are Kassams and Katyushas being fired into Israel, where is the problem in defending yourself?” one official said. “Israel cannot compromise its security, otherwise it will be the civilian population that will suffer.” The official argued that Israel’s West Bank barrier, even when it cuts through Palestinian territory, falls under the jurisdiction of security. “When there is peace, the route will be reworked,” he said. “For now, it is in disputed territory. First, let Israel and the Palestinians reach a peace agreement, and then, once there is a deliberate step toward peace by the Palestinians, the details can be worked out.”

If France disembarks from its wrong and illogical foreign policies vis-a-vis Israel, there could be a new awakening and subsequent shift in EU policies towards Israel as well. This could have a positive effect on the conflict between Israel and the Arabs, making accountability the cornerstone for any future interest in securing peace between the two sides. Perhaps France will sometime in the near future take the lead in pressuring the Palestinians to truly moderate themselves, to disinvest from their failed policy of using violence in place of negotiations and prepare their society for an eventual peace with Israel.
The problem isn’t about Israel, which already has a formal policy that invests Israel’s future in the realization of a democratic Palestinian state that is at peace with neighbors, including Israel. The problem is that the Palestinians haven’t let go of their “all-or-nothing” plan for a greater Palestine, which includes all of a Israel. No matter how tall of an order, at least there is some element of hope, no matter how remote it seems right now. More here *L* KGS