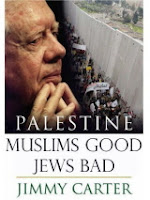 To those of you who follow the pages of the Tundra Tabloids, Jimmy Carter’s recent book is old news, so I won’t bother mentioning the grossly flawed details in his book about the Palestinian/Israeli conflict war.
No, I want to draw your attention to seedy side of Jimmy Carter –in spite of his claim of being impartial– who has fully aligned himself with the intransigent –all or nothing– Arab position.

It is also highly ironic of Carter to write a book that disparages US Jews for supposedly controlling US public debate and its foreign policy concerning Israel and the Middle East, while being himself awash in the money of special interest groups, namely the Saudis.

In Carter’s upside down world, the only money that influences, is Jewish money. The interesting thing to me is, the fact that Carter has taken great steps in keeping Saudi funding to the Carter Center and his peanut farm under the radar screen. To a great extent he has managed to do so with little or no problem at all….until now.

FPM has an article by the esteemed Alan Dershowitz, who sheds light on the role Saudi foreign finance has played in shifting Carter’s stance vis-a-vis Israel over the past decades. Carter is simply not the impartial voice he portrays himself to be, far from it. His acceptance of Saudi money while claiming to be a champion of civil/human rights is contradictory as it is disingenuous.

Recent disclosures of Carter’s extensive financial connections to Arab oil money, particularly from Saudi Arabia, had deeply shaken my belief in his integrity. When I was first told that he received a monetary reward in the name of Shiekh Zayed bin Sultan Al Nahayan, and kept the money, even after Harvard returned money from the same source because of its anti-Semitic history, I simply did not believe it. How could a man of such apparent integrity enrich himself with dirty money from so dirty a source?

And let there be no mistake about how dirty the Zayed Foundation is. I know because I was involved, in a small way, in helping to persuade Harvard University to return more than $2 million that the financially strapped Divinity School received from this source. Initially, I was reluctant to put pressure on Harvard to turn back money for the Divinity School, but then a student at the Divinity School, Rachael Lea Fish showed me the facts.

“I was amazed that in the twenty-first century there were still foundations that espoused these views. The Zayed Centre for Coordination and Follow-up, a think-tank funded by the Shiekh and run by his son, hosted speakers who called Jews “the enemies of all nations,” attributed the assassination of John Kennedy to Israel and the Mossad and the 9/11 attacks to the United States’ own military, and stated that the Holocaust was a “fable.” (They also hosted a speech by Jimmy Carter.) To its credit, Harvard turned the money back. To his discredit, Carter did not.

Simply put, there is more to Jimmy Carter than meets the eye, which gives reason as to why he has taken such great lengths in keeping that way. Something has changed Carter, he is no longer the same “Jimmah” that championed human/civil rights in the 70’s, whose moral platform collapsed the moment he accepted money as a private person from immoral undemocratic regimes to help fund himself and the Carter Center. More here. *L* KGS