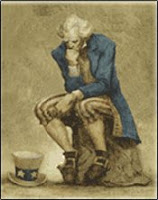 James Lewis at the American Thinker has a good take on why Europe has taken such a sheepish role in the Iranian hostage taking scandal. If it’s any indication on how the hostage taking crisis is being mishandled by Europe, one needs only to look on how its media is reporting it.

The Finnish state run news agency YLE, keeps referring to the British sailors and marines as having been “arrested”, while giving the Iranian claims top billing in almost every report. The British (truthful) version of the event is almost always mentioned –in passing– towards the bottom as if it were an “inconvenient truth”.

“Today Britain is being raked over the coals by the nasty old Barbary Pirates, in the shape of the Madcap Mullahs of Qom. All the United Kingdom needs is a little help from its old friends France and Germany, the twin pillars of the European Union.

But so far the EU is remarkably reticent about the whole affair. Why? Well, it’s the Almighty euro. Nobody wants to lose a single blessed euro to rescue the British captives. Laissez les Anglo-Saxons aller à l’enfer! “

We can forget a civilized dialogue with Tehran. Tehran is in the hands of barbarian throwbacks, and its seventy million people will continue to live in fear until the theocracy is overthrown, just like the Soviet Union and Eastern Europe.
But Europe has a lot of economic clout in mullah land. David Frum lists the following:

The anti-Bush block in “Old Europe” as well as their counterparts in the Democrat ruled US Congress and Senate keep howling that the US in Iraq only for its oil, when the truth actually is: “Old Europe” and its morally defunct allies are not in Iraq due to their dependence on Iraqi and Iranian oil. With friends like these who needs enemies? More here. *L* KGS