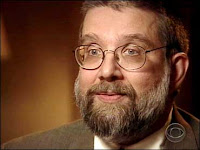 James Lewis over at The American Thinker, has an opinion on the recent article by the CIA’s former Bin Laden specialist, Michael Scheuer. I believe that Lewis presents a solid argument against the former CIA employee’s “analysis” of KSM’s admissions to the folks down at Guantanamo Bay. Lewis writes of Scheuer;

“Oddly enough, the CIA’s top Bin Laden’s specialist has an utterly immoral view of war, contrary to the entire Western “Just War” tradition, which ranges from Cicero to Aquinas and well into the 20th century. In a Just War context, the Geneva Conventions mean something; targeting innocents means something; wearing uniforms that visibly identify soldiers and protect civilians means something. None of those major, life-saving civilizational constraints mean anything to Scheuer. He approvingly quotes KSM:

Scheuer’s article can be found here.

But that is the barbarians’ view of warfare. And if you hold that view, there is no difference between the fire and the fire brigade. The fire consumes innocent lives, while the fire brigade risks life and limb to save them. But the Scheuers of this world are so morally lost and confused that they cannot tell the difference.

Scheuer certainly doesn’t seem like a very bright or well-informed guy, but much worse, it is his moral worldview that is corrupted: That is the real problem. If our CIA promoted him up the ranks in utter disregard of his nihilistic view of the American cause, there must be something profoundly wrong at Langley.

Here again is another morally confused analyst who stumbles on the West’s “Just War” tradition. As Lewis adroitly puts it, “In a Just War context, the Geneva Conventions mean something”. There is absolutely no moral equivalence between the viewpoint that Khalil Sheikh Mohammed holds concerning warfare and the US’s.

As Lewis aptly remarks, “KSM has a barbarians view of warfare”. I am reminded of a speech delivered by Dr.Daniel Pipes to a British audience gathered to hear him debate London’s mayor, Kenneth Livingston. Addressing the audience attending the conference under the title: ” A World Civilisation or a Clash of Civilisations”, Pipes stated:

Of course Daniel Pipes hits the nail squarely on the head, the only accurate way to describe the mindless violence being carried out by the squads of raging jihadis around the world, who band together under the pirate flag of al-Qaida, is barbarism. Their actions are purely barbaric in thought and deed. It was the work of Islamic barbarians who left two children in the back seat of a bomb laden car, then set it off as they themselves ran away.

The morally confused (like Scheuer) seek to define every act of violence through the prism of their own moral relativism, where all is one and the same, victim and executioner. To the moral relativists, terrorism is an abstract concept, with the size of each opposing side determining who is right and who is wrong and justness of their cause. Again I can’t resist to qoute Lewis: “there must be something profoundly wrong at Langley.” There is. More here. *L* KGS