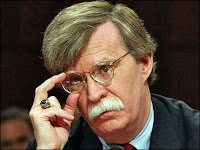 Former US ambassador to the UN, John Bolton, recently stated that the US did in fact, forestall a ceasefire in order to allow Israel time to defeat the Hezbollah in last year’s war between the two sides. Bolton:

“Israel was reacting in its own self-defence and if that meant the defeat of the enemy, that was perfectly legitimate under international law.”

I totally agree. The only down side to the implementation of the eventual ceasefire, was that the Hezbollah was still left standing, and that Unifil was –and still is– unable to stop the flow of weapons from Iran into Lebanon. To those who still hold to the illusion that any act of aggression against Israel does not warrant a military response, since when does the knowledge that military responses will result in the unintended loss of civilian life, negate that entirely legitimate response?

Actually, the proper address for the Israeli response to Hezbollah’s acts of aggression should have been Syria, the weigh station for Iranian arms in transit to the Hezbollah. Destroying about 250 of Assad’s tanks would have sent the right message home. If Ariel Sharon had been the chief decision maker, I’d lay odds that that’s what the Israeli response would have been. More here. *L* KGS