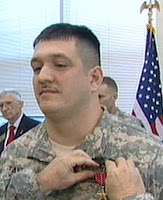 “We talk a lot in this culture about heroes and for some reason we think professional athletes are heroes, rock stars are heroes, and movie stars are heroes. Ladies and gentlemen, this is a hero.” That is how one lieutenant described Sgt. Taylor, because Taylor’s modesty would surely prevent him from ever describing himself as a “hero.”

On Feb. 22, 2006, Taylor and his intelligence team headed out to search for roadside bombs in a volatile region of Afghanistan. They had received word that a bomb had exploded in the area the night before, so his team – a combination of Afghan national police officers, Army intelligence personnel, and U.S. military police – planned to gather any information and evidence about the explosion. By studying the bomb’s components, they might be able to determine who manufactured it – and how to protect against similar devices in the future.

They climbed to the top of a ridge to scout the valley below, where the bomb was supposed to be. There were no civilians in sight, which instantly put Taylor on alert. The wooden box supposedly holding the shards of the bomb drew the team’s attention. Yet, instead of pieces of an exploded bomb, the box held a receiver for an anti-tank landmine – and a large rocket.

Having hardly any time to think, Taylor grabbed the two Afghan police officers near him and jumped on top of them in a ditch, just as the weapon exploded. The flying shrapnel found its mark with Taylor – but his body armor protected him from serious injury. The Afghans had been wearing only flannel shirts, and so were saved by Taylor’s split-second decision. For his actions, he was awarded the Bronze Star with “V” on Jan. 6, 2007.

Sgt.Taylor is only one among the best and the bravest. Job well done. *L* KGS