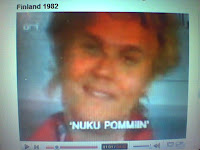 Of all the Ironies…….

The recent brouhaha over the Israeli song entry for the 2007 Eurovision song contest “Push The Button“, has taken a new twist. While it’s true that some Eurovision songs in the past have undergone scrutiny for supposed violation of the rules guiding the contest, one song apparently had no problem at all being approved.

The Finnish 1982 entry by the group Kojo, titled “Nuku Pommin” (“Bomb Out” or better yet “Sleep while the bombs fall”), tells of the threat to Europe during the height of the Cold War when most of Europe were against the US deployment of nuclear tipped cruise and Pershing missiles.

So if anyone can explain why the Finnish group Kojo has a more valid right to sing about its fear of nuke bombs than the Israeli group Teapack, please let me know. *L* KGS

“In 1982 the Finnish entry was a very political song solely about bombs, and nobody had a problem with that. Maybe because the bombs they feared weren’t Iranian but American. Yet again Israel is singled out. Please expose this hypocrisy.”

Al Avai adds: I figure that no matter which way it goes, Israel makes its point. If the song is banned, this will make international news, give the song publicity, and we can well ask why it is that threats such as nuclear attack cannot be criticized. Ban-the-bomb movements were widespread in Europe when it was a question of the USA installing cruise missiles in the 1980s.

Isn’t the right not to be annihilated rather basic? If the song is played, it might not be heard by so many people, but its contents are sure to raise more discussion. It’ll never win, but that’s not the idea. It should be used as a litmus test for where Europe stands when it comes to extremism.

Correction: Another Tundra Tabloid reader sent the following; “By the way, the name of the group has nothing really to do with tea packs. It is Tipp-ex (correcting fluid). “

Naomi adds: “we aren’t seeing the pot calling the kettle black here, are we? The phrase in Hebrew, presumably borrowed from the Arabic is: The camel doesn’t see his own hump. If Europeans had to look at their own hump, they’d realize that the Hunchback of Notre Dame looks like Robert Redford compared to them.

BTW – even though it is pronounced Tippex, like the correction fluid, the group writes its absurd name Tea Packs. I suppose this is deconstructionist or post-modern or one of those things that has passed me by in modern culture. All the groups have weird, misspelled names nowadays. “