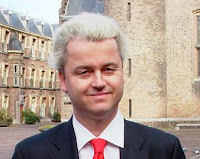 Another Dutch politician is the focus of Muslim rage, this time it comes from the direction of Mecca. The Saudis are seething over Dutch MP, Geert Wilders‘ statement that Muslims should “tear out half the Koran” if they wanted to live in Holland.

After a recent speech given by the former Dutch MP, Ayaan Hirsi Ali, a similar statement was made by her during a question and answer period. While Wilders’ statement called for only “half of the Koran” to be trashed, Hirsi Ali called for 3/4 of Mohamed’s work to be shelved.

No doubt, there will be those screaming again about European “Islamophobia and bigotry” being directed towards Islam ect. ect. ad nauseum, which is nothing more than an attempt to divert scrutiny from Islamic teachings by feigning Muslim “victim hood”.

What is interesting about the Saudis’ response — and other key Muslim orgs. — is the total lack of interest in addressing the main concerns raised by these politicians about their religion. The subservient role placed on women by the Koran, as well as the fate of their well being given to male members of the household, are just some of the worrisome aspects of Islam that causes concern for many Westerners.

During the Q&A period that followed her speech, Ayaan Hirsi Ali answered the question of whether or not Islam is compatible with the concepts of democracy. To paraphrase her comments, Hirsi Ali said:

“it’s not a question of Islam itself ever being compatible with democracy, one would have to discard 3/4 of the Koran in order it to become so. It’s about the individual Muslim being compatible.”

Interestingly enough, Finland’s YLE news is trumpeting the finding of a recent BBC poll, according to which “the vast majority of the world’s population believes the tension between the Muslim and non-Muslim world is due to politics, not religion.”

The poll’s results have little to do with fact, but that doesn’t stop the media from projecting it as a “hopeful sign that dialogue and negotiations alone can solve the problems that presently exist”. People in the West are as influenced by their media as their counterparts are in the East.

According to the poll, 77% of British citizens believe that an understanding can be reached with the Muslim world, 64% of US citizens believe the same, with Muslims coming in at 52%. The BBC poll reflects that British institution’s willingness to create an alternative reality to what actually exists. The only people worth listening to are the ones interested in stating the true facts as they are.

They’re not hard to spot, they’re the ones with body guards around them or presently in hiding — being vilified by the Saudis — and/or having fatwas being made against them. *L* KGS