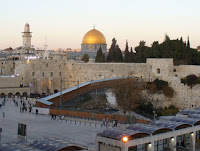 The blog Solomonia has a couple of posts worth reading concerning the recent riots, in connection with the Israeli archaeology dig near the Temple wall outside the Muslim Mosque compound. Read here and here.
Also of interest is the comment section at Toby’s NorthernLights, of a post highlighting the the good qualities of OTM‘s radio pod casts. Fair enough, there is always room for alternative viewpoints with dissenting analysis, but what’s of interest to me is Toby’s take on a couple of Slate’s editors who were “partying in Israel on AIPAC’s dime” (read=”journo junkets”).

While these junkets do carry some risks, (therefore most news media outlets refuse their journalists’ participation) he points out that both managed to give an open accounting of why they were in Israel, as well as drawing attention to some very embarressing legal proceedings against Israel’s acting president Moshe Katsav (perhaps a knee-jerk reaction resulting from the junket).

While disparaging Israel “journo junkets”, there is no mention of the dilemma that faces the news media in reporting on a conflict in which one side is a democracy with a free and very vocal press, and the other that subjects both its own media as well as the international community’s to intimidation and violence.

Part of the problem also stems from the fact that there is a very limited number of Western journalists who are fluent in Arabic, making them dependent on local Palestinian stringers who are fluent in all three languages of Hebrew, Arabic and English. If a journalist wishes to maintain open doors with the Palestinian Authority, one does not report everything as it is, but in a round-about-way without appearing to come down too hard on key principal Palestinian players.

This explains in part, why Israel is always at a continual disadvantage vis-a-vis the Palestinians concerning the international news media and its news reporting. The latter cares very little for the facts, as long as the sensationalized news hype gets carried out to the world via the major news wire services.

Many in the paper news media are just plain lazy in getting to the bottom of many of the more sensantionalized claims disseminated by the various news wires services (at the behest of thier Palestinian stringers) being concerned with their dead lines, and old news story (over 24 hrs old) is old news no matter how flawed. They are not interested in doing any follow up, for most in the news media lack the funds to field their own journalists even if they wanted to do some more digging on a fishy story.

What I also find interesting is his belief that Israel, somehow receives “kid glove” treatment by many US journalists, while the opposite is true. Perhaps he is influenced by the outright vitriolic news reporting by the British/European media, viewing the US media’s reporting as being tame in comparison. Fair enough, but grossly unfair reporting by the Europeans does not however, absolve the biased reporting of their American cousins.

Guano’s post (that Toby links to) is full of standardized Palestinian “boiler plate” propaganda that includes a link to the radical (guru rabbi) Michael Lerner’s shpiel on AIPAC. (Lerner is a far-Left loon who waves around his title of “Rabbi” (with a very little -r-) so he can apologize for Palestinian terrorism, promote Marxism, and leftist anti-Semitism. [Jews control debate on Israel in the US bla bla bla ad nauseum/Jimma Carter])

Hopefully Toby, (a WMD analyst for the Finnish Foreign Affairs Institute) doesn’t buy into the overloaded statements by blogger Guano, that “Israel indiscriminately bombed Lebanon”, due to it being an absolutely false claim, that clearly does not square with the facts. *L* KGS