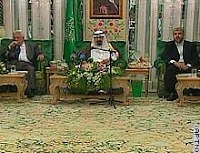 So the two sides of Hamas and Fatah make nice in a Saudi room overlooking the square where the devil is stoned. So what? This was done solely for the purpose of unleashing the flow of money from the coffers of the international community into the bottomless pit of Palestinian malevolence. The two sides of course loathe the other, and only in the interest of paying off their terrorist comrades in arm and keeping the civilian population from rioting, will they set aside the “day of reckoning” and pay lip service to “unity”.

The combined government of Hamas and Fatah with the help of the Saudis will be trying to put a major “spin” on Hamas’ supposed abrupt change of heart towards Israel, saying that Hamas “respects” the existence of Israel in place of recognizing Israel’s existence. Sorry, but it’s not good enough. It’s a subtle enough change though, nuanced with the right amount of ambiguity that will give the EU the opportunity its been seeking to reopen the money spicket. Truth be told, the EU could really care less whether Hamas recognizes Israel or not, they have been itching to spread our European tax money on the Palestinians ever since the Hamas won in the parliamentary elections last year. Europe championed the notion for Hamas to participate in the PA elections, though the Oslo Accords that were signed by both parties of the PLO and Israel disqualifies Hamas’ participation altogether.

This means the further radicalization of the PLO (by Hamas) while it achieves a thin veneer of renewed respectability from those in the international community, who have always believed in the “pragmatism” of Hamas, (exm. Finland’s UPI H.Huuhtanen, who believes that its possible for Hamasto compromise) even though Hamas will not have tacitly recognized Israel. Hamas has created a loop hole for continuing on with the “struggle” when the conditions are right, those who continue to believe otherwise are just being naive. The Palestinian conflict with Israel is no longer one of nationalism, but an Islamist one, being a fight for the greater good of Islam and the Islamic world, the Ummah.

Al Avai adds his observations and reservations concerning the requirements Hamas must fulfill before the money starts to flow: There must be clear recognition, acceptance of previous agreements, and renunciation of violence. The Europeans and Americans must demand the same. What happens to all the weapons and support that have gone to Abbas? They fall into the hands of Hamas? What they are proposing amounts to a palace coup of the PLO and makes the call for a new election irrelevant. The fighting would then be between various PLO factions, rather than between Fatah and Hamas, because these two would be under the PLO wing.

Any indication that the Palestinians are indeed moving towards moderation and coexistence with Israel, will be judged by how they clamp down on the incitement of Israel in their society. Changing their schools books would be one very noticable move, which would be not overlooked by Israel. *L* KGS

Update: Michael Rubin has more on the situation here.