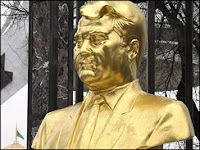 Turkmenistan’s fearless “golden leader“, President Saparmurat Niyazov, “who created a vast cult of personality during two decades of iron-fisted rule over arid, energy-rich Turkmenistan”, died on Thursday at the age of 66.

This is a guy who not only emulated Stalin’s cult of personality, he took it to newer heights in the same vein as North Korea’s late leader, Kim Il-sung and its present day leader, Kim Jong-il. The “Turkmenbashi” – the Father of All Turkmen as his people were forced to call him, substituted the names for the days of the week and months, for his own, his family’s and relatives.

I remember a discussion I had with a Finnish analyst (international terrorism) a few years ago, who had recently visited the region, and was amazed at the cult of personality he described in Turkmenistan. The most sensational thing he mentioned was of the rotating golden statue of Niyazov, whose face was always directed towards the sun. More here. *L* KGS