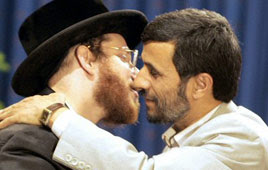 Iranian President, Mahmoud Ahmadinejad’s “Kiss of Friendship” with a member of the notoriously anti-Israel “Neturei Karta” symbolizes the bizarre atmosphere at that festival of hate, bigotry and racism.

Holocaust revisionists from around the globe flocked to Iran for a chance to air their despicable views, and to “rub elbows” with fellow Holocaust deniers. This is all very disgusting and hurtful to all who have lost family members in the genocide of European Jewry during WWII, the Jewish Holocaust, as well as dishonoring their collective memory.

Denying the Holocaust only helps to feed anti-Semitism which will encourage more acts of violence to be directed against Jews. That these marginalized Ultra-Orthodox Jews participated in the conference is indeed regrettable, because it appears to give a certain degree of credibility to the thoroughly discredited phenomenon of Holocaust denial. I wonder if being a Jewish “dhimmi” is worth the price for the ends justifying the means?

The UN General Assembly recently passed a resolution that rejects any denial of the Holocaust as a historical event, either in full or in part. That a UN member state is allowed to remain a member of that international institution after calling for the destruction of another member state, (Israel) while conducting a racist, bigoted and very mean spirited holocaust denial conference (which is solely meant to deligitimize the suffering of a whole race of people) is tragic. It also symbolizes the key fault with that world body which resides at Turtle Bay, as well as its outgoing leader, Kofi Anan. That outrageous and destructive behaviour will be met with tolerance and appeasement, instead of the swift hand of justice that it deserves. KGS

Al Avai adds: Even as Iran is denying the Holocaust and threatening a nuclear version of the same, it is refreshing to see that some Jews appear to take the “forgive and forget” attitude.

“The Presidency of the European Union is deeply concerned about the Conference on the Holocaust, which was held in Tehran on 11-12 December 2006. The Presidency regards the holding of the conference as detrimental to efforts aimed at furthering the dialogue among civilisations, cultures and religions.

The Presidency condemns in the strongest of terms any politically or racially motivated attempts and the use of pseudo-scholarship to deny or question the Holocaust and is disturbed by the continuous efforts of the Iranian government to question or trivialize the undeniable historical facts of the Holocaust and its horrors.

The Presidency urges the Iranian government to strengthen its fight against racism, xenophobia and anti-Semitism and to eliminate all forms of discrimination and other human rights violations against persons belonging to minorities.”

It helps to take action and write an email to the MFA, that brings their silence on an issue to their attention. 4.5 hours later, a press release was given. KGS

Updated: Israel’s chief Rabbi calls for the Neturei Karta to be excommunicated from the Jewish Family of faith:

“Israel’s Chief Rabbi Yonah Metzger called on world Rabbis to reject Neturei Karta members who participated in the Holocaust denial conference in Iran , saying they “sabotaged Israel” and should not be allowed entrance to Temples. “They betrayed the Jewish people and their heritage and particularly disgraced the Shoah and desecrated its memory. They tried to stain the Jewish people, who shy away from this low behavior, with their shameful behavior,” Metzger said. The chief rabbi called on all communities in Israel and around the world to reinforce the memory of the Holocaust amongst their community members. This dramatic step was significant because boycotts are rarely done, and only as a last resort.” More here.