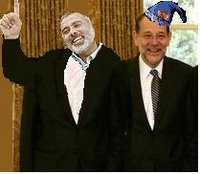 Solana’s foolish words expresses the thinking of the European Liberal Left, whose logic defies common sense and reason. That our own Finnish Foreign Minister, Erkki Tuomioja is more than likely in agreement with Solana, would not surprise me a bit. He was biting at the bit to officially recognize the Hamas the moment the Palestinian elections were over. 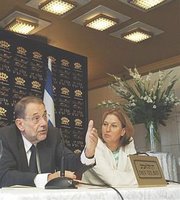 It looks like the Israeli Foreign Minister, Tzipi Livni, can’t believe the buffoonish statements coming out of Solana’s mouth, (does he really believe that tripe?) The lesson here is, that no matter how violent the Hamas will be, no matter what their charter says, these EU “numbskulls” will never admit to the obvious, that these racist religious totalitarians actually mean what they say.

Solana and “ilk”, appear to have no concept of the mindset they are dealing with, that they really do expect to drive the Jews into the sea. Hamas’ religious fanaticism will never allow for the Jewish state to reside in peace as a neighbor for good. Solana has just opened the door to the Hamas to “proceed as before” against Israel. The moron. KGS