What is becoming more and more clear to the rest of world, is the success of the Israeli Security Fence in stopping terrorism. What used to be common place in the streets of Israeli cities, like this bombed out bus 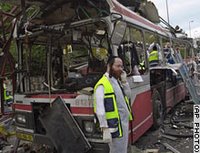 in which 17 Israelis were murdered and forty five wounded, has been greatly reduced by the Security Fence.

The French Foreign Minister, Philippe Douste-Blazy, has reversed the his government’s official policy towards the fence;

“I have significantly evolved on the matter of the separation fence” said Douste-Blazy on French Jewish television TFJ on Thursday. “Although the wall was a moral and ethical problem for me, when I realised terror attacks were reduced by 80 percent in the areas where the wall was erected, I understood I didn’t have the right to think that way.”

The French govt has gone from voicing approval over the ICJ’s ruling that “Israel should tear down the fence”, to: “The route itself is not in question, it would be stupid to question Israel’s right to defend itself.”( French government spokesman Jean-François Cope).

I doubt that this latest change of heart in France’s policy towards Israel’s most successful security measure has anything to do with their own unrest, but given the recent resurgence of violence in their own streets which has seen at least four buses being torched,

perhaps maybe in a small way,
…….it has served to highlight the fact that every state has a right to secure the safety of its own citizens. More here. KGS