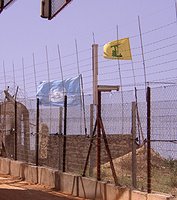 Hizbullah at it again. This raises an interesting dilemma for the beleaguered international organization at Turtle Bay, how can the UN ever hope to both observe and curb Hizbullah’s activities in S.Lebanon when they can’t/won’t do anything about their inflitration into UN run refugee camps?

I think that that Hizbullah’s building of bunkers in UNRWA administered Palestinian camps is a worrying sign RED FLAG for future troubles ahead. The mix of Shii’a Hizbullah and the Sunni Palestinians is as problematic as it is further proof that the Arab conflict with Israel is far from over, especially since the religious aspect to the conflict which has always traditionally taken a supportive role, has been moved “center front” by both the Hamas and Hizbullah. They have taken the conflict from it’s political setting, and made it into an issue of religious importance for Islam and the Ummah (Islamic community), surplanting Palestinian nationalism altogether.

“Even if one would be sceptical towards the original source (which Iam not), this is REALLY worrying news!”

This all goes to the heart of the dilemma, on how to manage/end a conflict in which the enemy has an almost exclusive Islamist utopian (and equally far fetched) agenda? This spells the end of disengagement.

Meretz MK, Avshalom Vilan rests his/Israel’s hope in the development of dialogue with the PA and Lebanese officials, (bypassing the extremist elements), that this will be enough to provide a forum in which peace can be obtained. IMHO, it’s a refusal to recognize the elephant in the room, there’s no getting around the fact that these religious extremist’s have hijacked the conflict, driving it into an almost irreversible direction in its present form. As long as Syria and Iran can continue as is, there will not be any advance. KGS