To that I say NO SURRENDER!

Just where is the tolerance and understanding from members of the religion of peace? 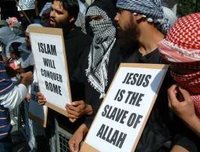 Am I supposed to believe that this crowd of Muslims protesting outside of Westminster Cathedral in London, actually supports diversity of opinion? Is any critical discourse about Islam automatically off limits to both Muslim and non-Muslim alike? How is the Muslim religion to be understood and to be treated by the rest of the non Muslim society, when it consistently exhibits intolerance and intimidation when criticized? No individual, institution or ideology, secular or religious is beyond criticism. In that respect, all are equal.

What has been taking place is an open display of supremacy by adherents of religion that seek to elevate their religious value system to a level of domince over all other values, including the values of the non-Muslim world. What we are witnessing is Islamic imperialism, which uses the threat of future violence to instill fear into those who dare criticize its totalitarian hegemonistic characteristics. So the threat to the Pontiff’s life, as well as the torching of seven churches in the Palestinian PA, and the murder of Catholic nun and her fellow co-workers in Somalia is in keeping with Muslim tradition of intimidation.

Islam is peaceful and tolerant to those who sumbit to Muslim superiority, but expresses itself to the contrary when that submission is rejected. Well…..get this, “lan astaslem.” It’s Arabic for …..I will not submit. KGS