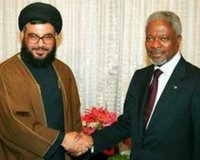 This is absolutely absurd. Its high time someone yank UN Sec-Gen Kofi Annan by the scruff of his neck, and send him packing. Hizbullah representative in Iran, Muhammad Abdullah Sif al-Din, says that Hassan Nasrallah plans to rearm his group for a second round with Israel. Conveniently convinced that “the Zionist threat” Israel means them harm, they need more weapons for ….self defence. Gee, I would have assumed that to be a decision, reserved for the sovereign state of Lebanon alone to decide, not a single political (terrorists) party.

On top of all this, the fuzzy headed UN Sec-Gen is demanding that the Israelis end the “humiliating” blockade, way before the Unifil contingent is “up and running”. Israel has justifiably refused Annan’s rediculous demand, with PM Olmert basically telling him to go pound some sand;

” he would not withdraw Israeli troops fully from southern Lebanon until the full implementation of the ceasefire, which took effect on August 14 and ended 34 days of conflict with Hizbollah guerrillas.”

Interesting how the IC screams “ceasefire, ceasefire”, then piddles around with who is going to supply what and for how long. Wants Israel to “lodge complaints” when it observes Hezbollah receiving truck loads of weapons from Syria, instead of destroying them. End the blockade of Lebanon’s ports which for now, has kept the Hezbollah from being rearmed. One could assume that the UN chief was working against the Israelis from the very beginning.

Then there is the Finnish Ambassador to Israel, Kari Veijalainen who in a JPost interview states that:

“Europe was not “softening” its position regarding the three conditions that Hamas needed to meet before being granted international legitimacy: forswearing violence, recognizing Israel and accepting previous agreements. However, he did say there might be “different interpretations of when each of these conditions would be met.”

After all of the “slight of hand” political manuevers by Europe and the UN, one could reasonably assume that the IC is once more “stacking the deck” in favor of Israel’s enemies. But that would be very cynical,…. wouldn’t it?. KGS

Here is another rendition of what Israeli PM, Ehud Olmert told Annan;

“The (resolution) is a fixed buffet and everything will be implemented, including the lifting of the blockade, as part of the entire implementation of the different articles. Israel will pull out of Lebanon once the resolution is implemented.”

“In a sign that Annan had made little progress in his discussions with Israeli leaders, he did not take questions from journalists after meeting Foreign Minister Tzipi Livni and neither was forthcoming about their hour-long talks.”