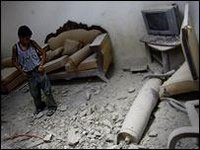 Here is another classic example of media manipulation that appears to have become a permanent fixture within the journalistic profession. If that’s not the case, then one would have to ask where was the “gate keeper” (editor) at the time, when this story and accompanying photo was approved for publication. If the editor was indeed on watch, why did he or she even consider this type of staging to be proper in the first place? The first issue worth considering, is the mere fact that an unexploded ordinance is extremely dangerous. I know for a fact that here in Finland, the police evacuate the area where and when WWII period ordinances(made in Soviet Russia) are found, and only allowed back in when it has been successfully removed, in spite of the age they’re still potentially dangerous.

The fact that the photo was staged is reason enough for the editor to reject it as unusable for publication, but then there is the troubling accompanying text, where they openly admit to pushing a boy close enough to the bomb in order to produce a more graphic picture. I believe that we are only witnessing the very tip of an iceberg, and if one looks deep enough, you’ll see a culture of manipulation within the photo/journalism industry that relies on the locals to help “tell the story”, that resort to using shocking reckless methods, as well as being partisans to the side in which they’re reporting from.

“When Um Ali Mihdi returned to her home in the southern Lebanese city of Bint Jbeil two days ago, she found a 1,000lb (450kg) Israeli bomb lying unexploded in her living room.
The shell is huge, bigger than the young boy pushed forward to stand reluctantly next to it while we get our cameras out and record the scene for posterity. “ Read here. KGS