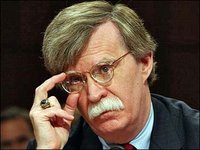 “Reporter: The news for the last 48 hours from the Middle East, it is more and more apparent now that many in the Middle East, Lebanese and others, are accusing the U.S. and the Security Council of being the obstacle to a real ceasefire immediately because that’s what they need. Could you explain in a couple words what is really your position about this?”

Ambassador Bolton: “Well look, I think we could have a cessation of hostilities immediately if Hezbollah would stop terrorizing innocent civilians and give up the kidnapped Israeli soldiers. So that to the extent this crisis continues, the cause is Hezbollah. How you get a ceasefire between one entity, which is a government of a democratically elected state on the one hand, and another entity on the other which is a terrorist gang, no one has yet explained. The government of Israel, everybody says, has the right to exercise the right of self-defense, which even if there are criticisms of Israeli actions by some, they recognize the fundamental right to self-defense. That’s a legitimate right. Are there any activities that Hezbollah engages in, militarily that are legitimate? I don’t think so. All of it’s activities are terrorist and all of them are illegitimate, so I don’t see the balance or the parallelism between the two sides and therefore I think it’s a very fundamental question: how a terrorist group agrees to a ceasefire. You know in a democratically elected government, the theory is that the people ultimately can hold the government accountable when it does something and doesn’t live up to it. How do you hold a terrorist group accountable? Who runs the terrorist group? Who makes the commitment that a terrorist group will abide by a ceasefire? What does a terrorist group think a ceasefire is? These are – you can use the words “cessation of hostilities” or “truce” or ‘ceasefire”. Nobody has yet explained how a terrorist group and a democratic state come to a mutual ceasefire.” More here. KGS