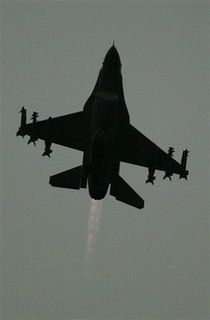 An excellent article by David Horowitz, who writes:

“Americans need to take a hard look at what is going on in the Middle East, because it provides the clearest picture possible of the war we are in. On one side are al-Qaeda, Hamas, Hizbollah, Syria and Iran and their allies: Russia, France, Greece, and the UN majority. On the other is the only democracy in the land of Muslim and Arab terror. The origins of this front in the war on terror are crystal clear: the desire of the Muslim terrorists — the elected majority among Palestinian Arabs and the occupying Shi’ite army in Lebanon, backed by Syria and Iran — to destroy Israel and push the Jews into the sea.

The war reveals the impossibility of a Palestinian state and the necessity of a civilized occupying force in a region that is populated by a people who have been terminally brainwashed into an ideology of hate, which makes their self-government a crime waiting to happen.”

I would like to take time to admonish all the Europeans that read this blog, to read and consider Horowitz’s words, this is our fight as well, not just Israel’s. In a prior post, I noted how quickly Finnish FM, Erkki Tuomioja adopted the French line that, “Israel’s response to the kidnapped soldiers has been disproportionate”. Finland needs to step up to the plate and and pronounce a EU foreign policy that will embody a moral clarity that clearly distinguishes between defencive measures and wanton destruction.

A wise foreign policy would give a “stiff arm” to terrorist demands, and a “free hand” to a democratic state that can be trusted to act to only ensure the safety of its people. KGS