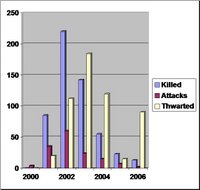 Roughly 4000 Palestinians have died in the 5 years of fighting since Sept. 2000, with the ratio being 3.5:1 in terms of Palestinians killed vs. Israelis. The proportion of armed vs. unarmed Palestinians killed is “roughly” 2:1, while Israel commands a 100:1 ratio in terms of military strength vis-a-vis the Palestinians (majority killed during the Intifada were armed fighters)proves without a doubt that Israel is very careful in whom it targets and the extreme difficulties involved in managing a low level conflict against an enemy that cynically uses its own people as shields.