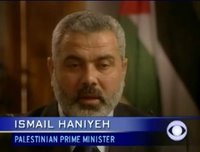 Taken right out of the pages of Arafat’s handbook on how to ‘snooker the West’, Hamas kingpin Ismail Haniyeh lies to the American public without batting an eye. What the Jihadi kingpin says to West differs greatly to the message he offers his fellow Palestinians. According to Palestinian Media Watch;

Hamas Denies statements were made:

A Hamas MP, speaking in Arabic to a PA newspaper, immediately denied these statements as lies, and part of a conspiracy of the US media to damage the true image of the Hamas:

“[Hamas] MP Mushir Al-Masri denied what was reported in various places in the media about Hamas abandoning its principles, relying on statements attributed to the Prime Minister designate, Ismail Haniyah, according to which he hopes that a peace treaty will be signed with the Israelis. He said that these statements, released on CBS, are unfounded [lit: naked of all truth]. Al-Masri said that these matters are part of a crazy campaign which aims at embarrassing and confusing the Palestinian arena and undermining the trust of the masses in Hamas movement… He added: “the Palestinian media grasps that this campaign should not be related to… and it understands that America endeavors to undermine the [Hamas] movement in the eyes of the Palestinian people…” As to the PM’s statements, which have been distorted, Al-Masri said: “the American channel [CBS] broadcast that Sheikh Ismail Haniyah had said in an interview that he hoped that a treaty with Israel would be signed in the White House. I believe that the basis for the controversy over the [Hamas] political plan are the [peace] agreements, which in our opinion bring no benefit…”[Al-Hayat Al-Jadidah, March 19, 2006]”

Just like Yasser Arafat before him, Haniyeh is beginning to master the art of deception. The question remains, has the West learned from its past mistakes and not trust the words of a bald face liar, or repeat their same stupid mistakes all over again? KGS