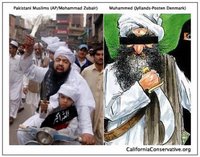 I believe that Finnish Prime Minister Matti Vanhanen should apologize for his naive apology. Thanks to Michelle Malkin for bringing the photo on the left to the light-of-day. It appears that the cartoonist was very correct in his depiction of what the image of Mohamed brings to his mind.

I have yet to see how this DOES NOT resemble life in the Islamic world, where no one is allowed to venture from the herd mentality, and think for themselves without the threat of their very lives being taken from them by an intolerant mob.

“There is no freedom of speech in those Arab countries where the demonstrations and public outrage are being staged. The reason many people flee to Europe from these places is precisely because they have criticized religion, the political establishment and society. Totalitarian Islamic regimes are in a deep crisis. Globalization means that they’re exposed to considerable change, and they also fear the reformist forces developing among émigrés in the West. They’ll use threatening gestures against the West, and the success they achieve with their threats, to intimidate these people.”

[Pakistani protesters holding daggers stage a rally against the publication of cartoons depicting Islamic Prophet Muhammad, with black banners arounds their chests that read, ‘God is Great,’ Friday, Feb. 24, 2006 in Peshawar, Pakistan. Thousands of Islams defied a ban on rallies across the country in condemning the Prophet Muhammad cartoons printed by some Western newspapers. Placard on right reads ‘ America, Israel and India are satins.’ (AP Photo/Mohammad Zubair)] 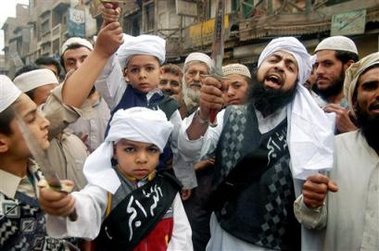 As the Brusselsjournal’s article ‘More and More Moderate Muslims Speak Out in Denmark’ states :

“Moderates such as Kamran Tahmasebi say they have had enough of fanatic Islamism and its intimidation of the Muslim immigrants in Denmark. “It is an irony that I am today living in a European democratic state and have to fight the same religious fanatics that I fled from in Iran many years ago,” Mr Tahmasebi says. He came to Denmark as a refugee in 1989. Today he works as a social consultant and is very grateful for the life Denmark has made it possible for him to have. He says he no longer wants to keep a low profile to avoid attracting the attention of the imams. The cartoon affair was an incentive for him to stand up and warn against the Islamist imams in Denmark, whom he says are damaging the integration process with their misleading criticism of Danish values and norms.”

Lets face facts, these Danish cartoonists were asked to draw pictures of Mohamed as how they perceived him. As Malkin headlines a post on her blog ”LIFE IMITATES ART IMITATING LIFE”, I find that I cannot disagree with her perceptions either. KGS