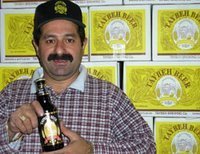 Hamas’ win spells doom for moderates and minorities as they solidify their base of support, with the implementation of Sharia law and strict control over social behavior. If the much touted ‘first and only Palestinian brewery’ in the PA is closed, that, more than anything else, will be the sign that tougher times are ahead. Lawlessness was of course a factor for Hamas’ success, but ‘social disorder’, (the breaking of traditional taboos) is entirely another kettle of fish altogether. Religion has been proven once again to be a powerful elixir, as well as a panacea. KGS

“Abu Ghazi explains that he voted for Hamas “in the hope that they as they chased Israel out of Gaza they will know how to bring peace and bread to the West Bank.” The coffee shop’s owner said he does not expect many changes in the political situation under Hamas. “On the political front, things will remain the same, and what happens will be America and Israel’s decision because we decide nothing. Hamas is far from being able to play with the big boys. If Arafat and Abbas failed, the new parliament speaker, Ghazi Duwaik, and the candidate for prime minister Ismail Haniyeh, even Khaled Mashaal, won’t be able to revive the peace process and give us our rights.”One thing that most the attendees hope for was that Hamas will be able to put an end to the state of social anarchy in the West Bank and the Gaza Strip. “Military anarchy is easier than social anarchy where women sit in coffee shop and drink beer — that’s unacceptable.

That’s what causing us so many catastrophes: Allah’s fury and not Israel. When women want to smoke cigarettes, drive cars, go to coffee shops, smoke Nargila and drink beer, may Allah help Hamas in restraining these immoral permissiveness,” Abu Mohammad, 40. According to Abu Mohammad, Hamas has to impose Islamic law. “In the end, Allah will bring us freedom and victory, but we have to follow his words before reaching these ends. We need to pray, to preserve morals and respect and to stop immoral acts.

I have a little girl, here in Ramallah. When she grows up and sees all these girls smoking cigarettes, driving cars and going to coffee shops without a hijab, how can I tell her that wearing a hijab is the right thing to do? It is not simple, and therefore I hope Hamas will liberate us from this shame even if they fail to liberate Palestine.” Hamas was swift to reject calls by leader Mahmoud Abbas to respect agreements signed with Israel and pursue a peaceful policy. As Abbas delivered his speech before parliament, Hamas members booed while a handful of women applauded in support of the Palestinian leader”