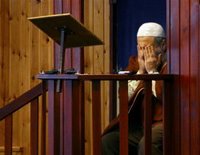 Little by little the picture is coming into focus on the Mohamed picture debacle. The Palestinian Imam, Ahmad Abu Laban has served Europe with a stark reminder and warning, ”that any grievance a local Islamic community has within any secular European state, is a concern for entire Islamic community of the ‘Ummah’.

Regardless of denials to the contrary, Europe has been served a religious ‘Fatwah’, by the Islamists who are keenly intent on bringing Europe into line with Islamist thinking. Moderate Muslims everwhere are now the ones most likely at risk by the Islamists, and are probably less likely to address their concerns in public about religious hegemony, after seeing Europe capitulate to world pressure. Most interestingly but not surprisingly, the Finnish academics have been vocal with their call for ‘restraint and respect, but somewhat silent on the fact that tolerance in a liberal democracy goes in both directions. The right to criticize sacred cows….even Mohamed, is a right of free speech.

It must have been difficult for Suomen Kuvalehti editor in chief, Tapani Ruokanen, to admit that “this is a slightly cowardly attitude.” (not to print the pictures) but at least he was honest about it. Now we have the Imam serving warning that the Prophet Mohamed is off totally limits. I must ask the obvious then, how will any attempt to reform Islam be made, if the main Islamic figurehead is totally off limits for discussion?

Christianity has had its religion chastized, ridiculed and deconstructed by the scientific and intellectual community for centuries, what will happen if someone (Muslim or non-Muslim)dares to say the Mohamed was not a real figure, or Mohamed was this or Mohamed is that? Will all discussion no matter how unpleasant to the listener be now forbidden, because it offends the Muslim ear? Just where are we now headed? KGS

Note: Even the name of Mohamed has gone through a transformation during these past few months. Both the Helsingin Sanomat and the Keskisuomalainen are no longer using the old Finnish spelling method of Mohammed, its now the Muslim acceptable Muhammad, as advised by the professor of Islamic poetry Jaakko Hämeen-Anttila.

“The most prominent Islamic leader in a network blamed by Danes for the global uproar over Prophet Muhammad caricatures condemned the violence Friday but said the conflict has improved the West’s understanding of Muslim values. “The volcano was inside,” Ahmed Abu Laban, a Palestinian immigrant to Denmark, said at a mosque in Copenhagen. “Now it’s erupting, and after the volcano there will be peace again.”