Without the re-printing of the twelve pictures of Mohammed by the numerous blogs and newspapers, the fact that the Danish Imams inserting three bogus cartoons of the Prophet(which is the real reason for the fury in the ME), would never have come to light. Thanks to Paul Belien’s article at the Brussels Journal for the following commentary:

” When the Danish press discovered the three false so-called Danish cartoons, the imams refused to say where they had got them. They claimed, however, that the false cartoons were genuinely Danish and had been added to “give an insight in how hateful the atmosphere in Denmark is towards Muslims.” The Brussels Journal has always doubted whether the cartoons added by the imams were genuine. Whenever we mentioned them we explicitly wondered whether they were not “of the imam’s own making.” Certain Western mainstream media, however, such as the Australian network SBS and the British BBC authoritatively declared that the pigsnout was one of Jyllands-Posten’s cartoons.

Yesterday an American blogger discovered where the “pigsnout Muhammad” comes from. It has no relation to Muhammad whatsoever, it is not even a cartoon, but a fax image of a photo of a French clown performing at a pig festival. Denmark is being punished at the instigation of radical imams because twelve cartoonists have depicted Muhammad. However, these imams created their own three Muhammad images. They have even presented a French clown as being Muhammad. Because the twelve JP cartoonists are not Muslims, the Muslim blasphemy laws do not apply to them. But these laws do apply to the imams.

Consequently, these imams deserve death. They – and no-one else – depicted the prophet as a pig – the highest imaginable insult in Islam. …Western papers and blogs that published the twelve cartoons were right to do so. If they had not published, no-one would have been able to ascertain that the pigsnout was not among them. If they had not published, the cheating, blasphemous imams would have got away with their lies. The public is served by information, never harmed by it. Let this be a lesson to the cowards of The Guardian, SBS, the BBC and the British and American mainstream media, who “out of respect” for Islam would have allowed blasphemous imams to get away with their gross insult of the prophet, with slander and libel, and with the violent acts which they instigated. 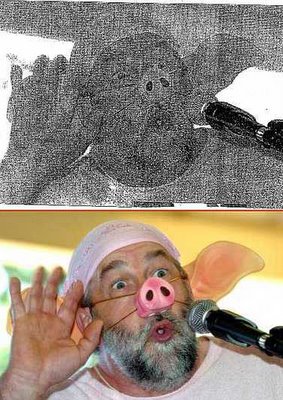 I believe that the material Imam Ahmad Abu Laban took with him is also worth reading. You’ll find it by clicking here. Its full of lies and distortions, and this has not been reported on in any real way in Finland. The main issue as I see it, is that the Imam turned his back on Danish society when he chose to take his domestic problems to the states in the ME. There are limits on what one can do in a liberal democratic society, in regards to a complaint with the media. Dialogue with the paper and letters to the editor are the only course of action, and that effects everyone in society, no one is afforded special consideration. KGS