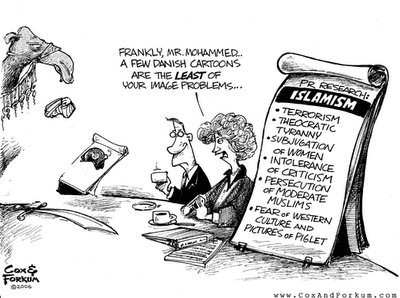 This cartoon by Cox & Forkum was not among the twelve published in the Danish paper Jyllands-Posten. I do believe however that its relevent enough to print. In the very same spirit as the Jyllands-Posten, I am showing just how far off the deep end the Muslim community has gone in their anger over those cartoons. The Islamic world’s rejection of the slightest measure of criticism of their religion, has damaged itself beyond words. Not acting like a ‘religion of peace’ , in demanding death and destruction of those who drew some pictures, is the exact opposite message they should be sending. On one hand, we are being told that the extremist form of Islam is supposed to be an aberration within Islamic tradtion, with the overwhelming majority of Islam devoted to peaceful co-existence…………well?

Flemming Rose, the Danish newspaper Jyllands-Posten’s culture editor, said the works were not intended to offend and were in keeping with a tradition of satirical cartoons.

“These were not directed against Muslims, but against people in cultural life in Europe who are submitting themselves to self-censorship when dealing with Islam,” he said by telephone Monday.

Her words should be given the benifit of the doubt and be enough to end the matter, besides, pictures of Mohammed have been made throughout the centuries. Just in case there are still some folks not convinced, I found a Muslim group who believe that the Islamic world is acting irresponsibly and I fully agree. KGS

“The Free Muslims Coalition condemns the reaction of American Muslim Organizations and Muslim governments to the unfavorable depiction of Prophet Mohammad in European News papers.Protests have spread across the Muslim world over the publication in European news papers of cartoons depicting Prophet Muhammad as a terrorist. Outrage over the cartoons has ignited demonstrations from Turkey to the Gaza Strip, and prompted a boycott of Danish products throughout the Middle East.

In Pakistan, hundreds demonstrated on Thursday, chanting “Death to Denmark” and burning Danish and French flags. In Egypt, President Hosni Mubarak warned that the decision by some European papers to publish the cartoons could encourage terrorists. Consequently, government ministers from 17 Arab nations have asked the Danish government to punish the newspaper for what they called an “offense to Islam” and some countries have even pulled their ambassadors from Denmark.The controversy intensified on Wednesday when a French news paper, printed a new drawing on its front page showing Jewish, Muslim and Christian holy figures sitting on a cloud, with the caption “Don’t worry Muhammad, we’ve all been caricatured here”.

The response by Muslims to the cartoons is absolutely pathetic and depressing but revealing. The reason Muslims are responding with anger and threats of violence is because most Muslims live in countries where democracy and freedom of speech are alien concepts.Moreover, the Muslim world suffers from a lack of visionary leadership. In this particular case, when Muslim leaders, including American Muslim leaders, realized that Muslims are furious they joined the chorus of fury rather than explain to their people that they must be reasonable and that freedom of speech is healthy even if it is insulting.

What is even more disgusting is that most American Muslim organizations, who should know better, have joined the chorus of instigators rather than taking this opportunity to teach their members about the importance of freedom of speech and tolerance.One would think that Muslims have learned a lesson from the mishaps of the radical Iranian spiritual leader, Ayatollah Khomeini when in 1989, he called on Muslims to kill British author Salman Rushdie for alleged blasphemy in his book, The Satanic Verses. The childish and stupid reaction by Khomeini caused an otherwise poor book to become a number one seller.

The Free Muslims Coalition hopes that the answer to all these questions is soon.