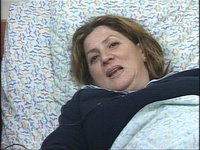 The contingent of police and security guards patrolling the shopping mall in Netanya during the latest suicide/homicide terrorist bombing, had dedicated themselves to the protection of Israeli society, and were willing to pay the ultimate sacrifice in order to achieve that goal. Haim Amram, one of the security guards that day, did so, and with great bravery in trying to stop the bomber, paid with his life.

The five people who were murdered that day, each embodied five equally separate stories and experiences, but each had one thing in common, the fact that they were Israeli. Other heroes included a pregnant policewoman, Sgt.-Maj. Shoshe Atija, (pictured above)who was four meters from the terrorist before the bomb went off, said : “What really bothered me is that I could not grab the hand of the terrorist before he set off his bomb.”

These are the people worth mentioning, its their deeds that should fill the headlines of the news, not the pathologically twisted and ‘perhaps’ brainwashed terrorist. Journalistic ethics should demand an accurate accounting of the happening, anyone who commits a political act of violence aimed intentionally towards the civilian population, should be labeled as a terrorist, and his evil deed as an act of terrorism.

The Central Finland newspaper (Keskisuomalainen) gave the headline :”Itsemurhapommittaja iski Israelissa” = “Suicide bomber strikes in Israel”. Lumping both the murderer and his victims in the number of dead. No mention of it being an act of terrorism, in spite of the fact that it fits every requirement given under the definition. KGS