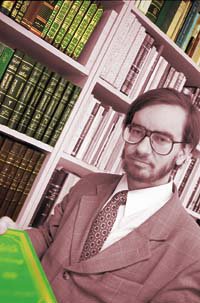 “Its Time For Muhammed to become Muhammad”

Really? At least that’s what the professor of Islamic Poety would have us to believe. According to Jaakko Hämeen-Anttila, the Finnish way of writing the prophet’s name can no longer be tolerated, and should take the form of how a Muslim would write it. That means changing the (e) to that of an (a). Simple right?

Well, it leaves me with a thought of, why can’t a westerner write the name of Mohammed the way he or she is used to writing it? I have nothing against anyone writing it in a way most comfortable to pronounce. Its only natural that a westerner would write it as Mohammed, …right? Is Hämeen-Anttila promoting a Muslim agenda, perhaps even an Islamist one by trying to distance westerners from their traditional views of Islam? KGS59

“Its Time For Muhammed to become Muhammad”

Keskisuomalainen 18,11 2005
Helsinki: Islamic culture and religion expert, professor (of Islamic poetry) Jaakko Hämeen-Anttila from the University of Helsinki, is of the opinion that, its time for the prophet Muhammed to become Muhammad in Finland.

There are three vocals in the Arabic language, i, a and u, and in the long vowels as well. The only sensible way to translate Arabic is to use the three vowel system in every word. If this is done, then the last vowel in Muhammed’s name will be the letter a, reasons Hämeen-Anttila.

According to Hämeen-Anttila many countries have already made the change and use the prophet’s name, as Muhammad.

The professor believes that Muhammed was written as Muhammed, due to the fact that vowels are pronounced differently in regular speech than in literature. There are many other kinds of instances that have formed writing styles from Arab dialects, and have become standardized. This appears to be the case here.