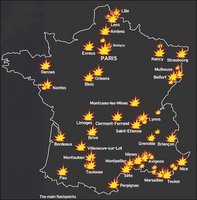 November 4, 2005 Amir Taheri. As the night falls, the “troubles” start — and the pattern is always the same. Bands of youths in balaclavas start by setting fire to parked cars, break shop windows with baseball bats, wreck public telephones and ransack cinemas, libraries and schools. When the police arrive on the scene, the rioters attack them with stones, knives and baseball bats. The police respond by firing tear-gas grenades and, on occasions, blank shots in the air. Sometimes the youths fire back — with real bullets.

These scenes are not from the West Bank but from 20 French cities, mostly close to Paris, that have been plunged into a European version of the intifada that at the time of writing appears beyond control. The troubles first began in Clichy-sous-Bois, an underprivileged suburb east of Paris, a week ago. France’s bombastic interior minister, Nicholas Sarkozy, responded by sending over 400 heavily armed policemen to “impose the laws of the republic,” and promised to crush “the louts and hooligans” within the day. Within a few days, however, it had dawned on anyone who wanted to know that this was no “outburst by criminal elements” that could be handled with a mixture of braggadocio and batons.

By Monday, everyone in Paris was speaking of “an unprecedented crisis.” Both Sarkozy and his boss, Prime Minister Dominique de Villepin, had to cancel foreign trips to deal with the riots. How did it all start? The accepted account is that sometime last week, a group of young boys in Clichy engaged in one of their favorite sports: stealing parts of parked cars. Normally, nothing dramatic would have happened, as the police have not been present in that suburb for years. The problem came when one of the inhabitants, a female busybody, telephoned the police and reported the thieving spree taking place just opposite her building.

The police were thus obliged to do something — which meant entering a city that, as noted, had been a no-go area for them. Once the police arrived on the scene, the youths — who had been reigning over Clichy pretty unmolested for years — got really angry. A brief chase took place in the street, and two of the youths, who were not actually chased by the police, sought refuge in a cordoned-off area housing a power pylon. Both were electrocuted. Once news of their deaths was out, Clichy was all up in arms. With cries of “God is great,” bands of youths armed with whatever they could get hold of went on a rampage and forced the police to flee.

The French authorities could not allow a band of youths to expel the police from French territory. So they hit back — sending in Special Forces, known as the CRS, with armored cars and tough rules of engagement. Within hours, the original cause of the incidents was forgotten and the issue jelled around a demand by the representatives of the rioters that the French police leave the “occupied territories.” By midweek, the riots had spread to three of the provinces neighboring Paris, with a population of 5.5 million. But who lives in the affected areas? In Clichy itself, more than 80 percent of the inhabitants are Muslim immigrants or their children, mostly from Arab and black Africa. In other affected towns, the Muslim immigrant community accounts for 30 percent to 60 percent of the population. But these are not the only figures that matter.

Average unemployment in the affected areas is estimated at around 30 percent and, when it comes to young would-be workers, reaches 60 percent. In these suburban towns, built in the 1950s in imitation of the Soviet social housing of the Stalinist era, people live in crammed conditions, sometimes several generations in a tiny apartment, and see “real French life” only on television. The French used to flatter themselves for the success of their policy of assimilation, which was supposed to turn immigrants from any background into “proper Frenchmen” within a generation at most. That policy worked as long as immigrants came to France in drips and drops and thus could merge into a much larger mainstream. Assimilation, however, cannot work when in most schools in the affected areas, fewer than 20 percent of the pupils are native French speakers.

France has also lost another powerful mechanism for assimilation: the obligatory military service abolished in the 1990s. As the number of immigrants and their descendants increases in a particular locality, more and more of its native French inhabitants leave for “calmer places,” thus making assimilation still more difficult. In some areas, it is possible for an immigrant or his descendants to spend a whole life without ever encountering the need to speak French, let alone familiarize himself with any aspect of the famous French culture. The result is often alienation. And that, in turn, gives radical Islamists an opportunity to propagate their message of religious and cultural apartheid. Some are even calling for the areas where Muslims form a majority of the population to be reorganized on the basis of the “millet” system of the Ottoman Empire: Each religious community (millet) would enjoy the right to organize its social, cultural and educational life in accordance with its religious beliefs. In parts of France, a de facto millet system is already in place.

In these areas, all women are obliged to wear the standardized Islamist “hijab” while most men grow their beards to the length prescribed by the sheiks. The radicals have managed to chase away French shopkeepers selling alcohol and pork products, forced “places of sin,” such as dancing halls, cinemas and theaters, to close down, and seized control of much of the local administration.

A reporter who spent last weekend in Clichy and its neighboring towns of Bondy, Aulnay-sous-Bois and Bobigny heard a single overarching message: The French authorities should keep out. “All we demand is to be left alone,” said Mouloud Dahmani, one of the local “emirs” engaged in negotiations to persuade the French to withdraw the police and allow a committee of sheiks, mostly from the Muslim Brotherhood, to negotiate an end to the hostilities. President Jacques Chirac and Premier de Villepin are especially sore because they had believed that their opposition to the toppling of Saddam Hussein in 2003 would give France a heroic image in the Muslim community.

That illusion has now been shattered — and the Chirac administration, already passing through a deepening political crisis, appears to be clueless about how to cope with what the Parisian daily France Soir has called a “ticking time bomb.” It is now clear that a good portion of France’s Muslims not only refuse to assimilate into “the superior French culture,” but firmly believe that Islam offers the highest forms of life to which all mankind should aspire. So what is the solution?

One solution, offered by Gilles Kepel, an adviser to Chirac on Islamic affairs, is the creation of “a new Andalusia” in which Christians and Muslims would live side by side and cooperate to create a new cultural synthesis. The problem with Kepel’s vision, however, is that it does not address the important issue of political power. Who will rule this new Andalusia: Muslims or the largely secularist Frenchmen? Suddenly, French politics has become worth watching again, even though for the wrong reasons.