Vlad does the leg work in getting these important vids published… 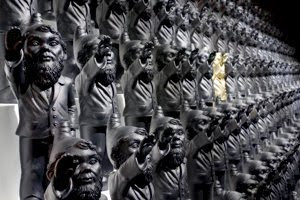 These days German Communists are out on the streets marching against “Nazis”.

Oh, they don’t call themselves “communists” anymore — presumably the stigma of Stalin and the gulag and the Stasi would make for bad PR. Nowadays they call themselves Die Linke (The Left) or Die Grünen (The Greens). But it’s the same old ideology, and its adherents go to great lengths to demonize anyone who is even a smidgen to the right of the Social Democrats.

In recent months the communists have been more and more stridently attacking members of the AfD (Alternative für Deutschland, Alternative for Germany) as “Nazis”. What began as murmur of allusion about National Socialist tendencies has morphed into a full-throated scream of “Nazis! Nazis! NAZIS!” whenever the AfD is mentioned.

The three videos below provide various illustrations of this process. Many thanks to MissPiggy for the translations, and to Vlad Tepes for the subtitling.

The first video features Katja Kipping, the leader of Die Linke, speaking to an adoring crowd in Dresden:

The second video shows an anti-AfD demonstration in Dresden. As Vlad points out, the demonstrators are completely in tune with George Soros and his “Open Society”:

The final video is the creepiest of the three. It features an East German woman named Marianne Birthler, a prominent veteran of the campaign for human rights in the DDR before the fall of the Wall in 1989. If anyone should know what real totalitarianism is all about, it is Ms. Birthler. Yet all she can do is join the chorus of “Nazis! Nazis! NAZIS!” against the AfD.

Note that the AfD said to have “stolen” the slogan “Wir sind das Volk” from the activists protesting against the DDR back in the 1980s. In other words, no group is allowed to proclaim “We are the People” without the imprimatur of the State: