I don’t think that that is what the greatest generation had in mind when they freed Europe and broke Fascism’s back. SANT JULIA DE RAMIS, Spain (AP) – Spanish riot police smashed their way into the polling station where Catalonia’s regional leader was due to vote in the disputed independence referendum on Sunday. Scuffles erupted outside between police and people waiting to vote.

Civil Guard officers, wearing helmets and carrying shields, used a hammer to break the glass of the front door and a lock cutter to break into the Sant Julia de Ramis sports centre near the city of Girona. At least one woman was injured outside the building and wheeled away on a stretcher by paramedics.

Clashes broke out less than an hour after polls opened, and not long before Catalonia regional president Carles Puigdemont was expected to turn up to vote. Polling station workers inside the building reacted peacefully and broke out into songs and chants challenging the officers’ presence.

National Police and Civil Guard officers also showed up in other polling centres where Catalan officials were expected.

Catalans defied rain and police orders to leave designated polling stations for the banned referendum on the region’s secession that has challenged Spain’s political and institutional order.

The country’s Constitutional Court has suspended the vote and the Spanish central government says it’s illegal. Regional separatist leaders have pledged to hold it anyway, promising to declare independence if the “yes” side wins, and have called on 5.3 million eligible voters to cast ballots. 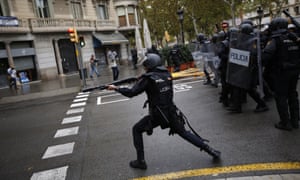