A correct assumption when looking at all of these Islamonazis fighting jihad in Syria and in Iraq coming back to Finland.

Poll: Over half of Finns think a terrorist attack likely within a year

An Yle-commissioned survey has found that 54 percent of respondents believe that a terrorist attack is likely to take place in Finland in the near future. At the same time, though, public trust in officials charged with maintaining security remains high. 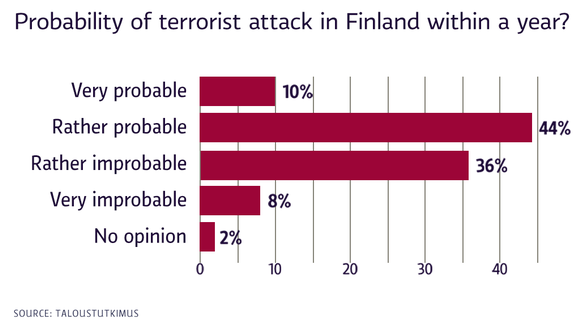 An earlier poll commissioned by Yle found that the recent terrorist attack in central Stockholm increased fear of violence and terrorism among the general public in Finland.

Hussein Al-Taee, an expert on terrorism and the project manager for Iraq of the Helsinki-based Crisis Management Initiative (CMI), told Yle that he understands the concern reflected by the poll.

“There have recently been attacks in Finland’s vicinity, in both St. Petersburg and Stockholm. In reality, the situation in Finland is a bit different than in those countries and cities. Indeed the risk is possible and it has recently increased, considering how many people there are being watched [by security officials],” he said.

“The number of people who are potentially the perpetrators of an attack is much smaller than elsewhere. Another thing that is different about Finland is that it is much better prepared than some other countries,” Al-Taee added.