Kicking a dead horse is an exercize in futility……

The Arabs in control of the areas afforded to them under the stillborn Oslo agreement do not want a state of their own, but they do want the destruction of the Jewish one.

Like the Holy Roman Empire, the two-state solution didn’t solve anything and it wasn’t in the business of creating two states. Not unless you count a Hamas state in Gaza and a Fatah state in the West Bank.

What problem was the two-state solution solving?

It wasn’t the problem of terrorism. Turning over land, weapons and power to a bunch of terrorists made for more terrorism. It’s no coincidence that Islamic terrorism worldwide shot up around the same time.

Posted by Daniel Greenfield
“Is the two-state solution dead?” 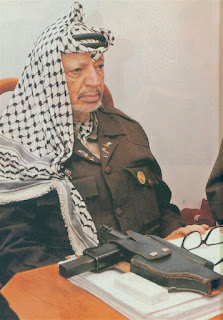 The two-state solution, a perverse euphemism for carving an Islamic terror state out of the land of Israel and the living flesh of her people, is in trouble. The solution, which has solved nothing except the shortage of graves in Israel and Muslim terrorists in the Middle East, is the object of grave concern by the professionally concerned from Foggy Bottom to Fifth Avenue.

Obama set up his betrayal of Israel at the UN to “save” the two-state solution from Trump. The media warns that David Friedman, Trump’s pick for ambassador, is so pro-Israel that he’ll kill the “solution.”

But you can’t kill something that was never alive.

The two-state solution is a zombie. It can’t be dead because it never lived. It was a rotting shambling corpse of a diplomatic process. If you stood downwind of the proceedings, it looked alive.

Up close there was only blood and death.

[…]
The consequences of giving terrorists their own country to play with were as predictable as taking a power drill to the bottom of a boat or running a toaster in a bubble bath. The least likely outcome of handing guns to homicidal sociopaths was peace. The most likely was murder. And that was as intended.

The problem that the two-state solution was solving was the existence of Israel; the Jewish Problem.

Spray the two-state solution over an irritating country full of Jews who managed to survive multiple Muslim genocides. Apply and wait for as long as it takes until the Jewish Problem is solved again.