The world’s moral inversion is complete.

Close it down, and pass out (cheapest available) cell phones to all those leaving the building. 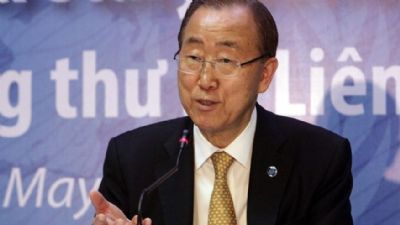 UN Secretary-General Ban Ki-moon (file photo)
This week Senators Lindsey Graham and Ted Cruz have posed a challenge for would-be presidents and all Americans: if the United Nations criminalizes Israel’s exercise of the right of self-defense it will pay a heavy price. The organization has no right to expect billions of U.S. taxpayer dollars to be doled out every year when they are spent undercutting our deepest values and our national security.

Moreover, in the coming weeks, the U.N. will issue another report on Israel’s “criminal” response to Hamas genocidaires in Gaza, commissioned by UN Human Rights Council authorities like Russia, China and Saudi Arabia.

These attacks on Israel are part of a concerted effort by the vast U.N. machinery to rewrite international law to the advantage of terrorists who use civilians as human shields – thereby encouraging the use of more civilians as human shields. What begins as the demonization of Israel, affects every democratic society forced to defend itself against Hamas or Hezbollah or ISIS or Boko Haram or al-Qaeda.