Of course Islam is a scourge on mankind, it’s as plain as the nose our our faces…….

Carreira mainly sees a threat to Western countries, and that is above all Islam. “I would say that Islam is the worst plague that  humanity has seen in the past 2000 years.”. Islam is “completely unable” to develop, respect for human dignity.
For Muslims it is therefore “impossible to respect human rights and the Western tradition”.

Jesuit Manuel Carreia: “Islam, the Worst Plague the Human Race Has Ever Seen” 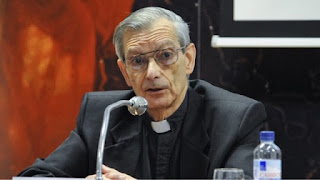 (Madrid) the famous astrophysicist and Jesuit, Father Manuel Carreira, has said “Islam, the worst plague that the human race has ever seen.”<

In an interview Carreira had indirectly responded  to a discussion on West Germany and said that one could not plausibly claim that “Islam is compatible with the rights of a European nation”.

The Spaniard Manuel Maria Carreira Verez SJ became famous mainly as an astrophysicist, but also as a philosopher and theologian. Since 1974 he is a member of the Vatican Specula, was an employee at numerous NASA projects in the United States and taught more than 30 years at various universities, including the John Carroll University in the US and the Pontifical University of Comillas in Spain.

The State must preserve Christian heritage, he does not want to jeopardize its existence

“The state need not impose any specific religious behavior,” but it has to be taken into account, that the Western countries are based on Christian ethics, because this has formed these States and made them what they are and what is necessary to defend.

“The Catholicity is a central key element in the development of the state”, which applies to all of Western Europe. Therefore, the European countries could not accept the abolition of Christianity without putting their very existence at risk.

There is growing secularization, and this was “up to a certain point, even desirable, because religion must not be a political element.” But the state has the task and duty to protect its Christian heritage as part of the common good.

Carreira mainly sees a threat to Western countries, and that is above all Islam. “I would say that Islam is the worst plague that  humanity has seen in the past 2000 years.”. Islam is “completely unable” to develop, respect for human dignity.

For Muslims it is therefore “impossible to respect human rights and the Western tradition”.

A Muslim in Europe “denies either this respect, then is an internal threat to Europe, or he accepts European thought, which means he is an unbeliever and is dead according to Islamic understanding.” Either way, “there is no positive contribution by Islam to a modern society that is respectful of the fundamental rights of every human being,” said Carreira.

Idea of the multicultural state “an intellectual blunder”