In this case it was the Norwegian state media smearing blogger Fjordman (Peder Jensen) as a paraplegic Nazi. Or in the case of Manfred Gerstenfeld who was ”interviewed for 20 seconds” by NRK’s Sidsel Wold who then made up a 3 minute interview out of whole cloth. 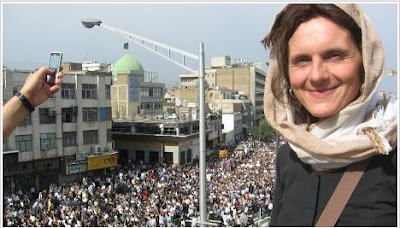 For a number of years, Norway has held the number one position on the Press Freedom Index. The perception that Norway has a free press is however largely false. Indeed, Norwegian authorities do not supervise or censure the media. Yet there is a strong anti-Israel slant and self-censorship among the editors of most media. The country shares a border with Russia. However, one often gets the impression that Israel appears in the Norwegian press more than its own powerful neighbor. Norway’s media are obsessed with Israel and many incite against it in various ways.

The aberrations of several leading Norwegian media often go beyond the usual bias of many other Western anti-Israel papers. They will readily report on issues in which they can blame Israel, but the numerous Palestinian crimes are often omitted or greatly under-reported. One usually searches in vain for articles about the Hamas party platform which mentions its intention to commit genocide of Jews. The same goes for the Palestinian Authority’s glorification of murderers of Jewish civilians. Frequent and transparent lies by Palestinian ministers, officials and media, rarely if ever get attention.

The Norwegian media works hand in hand with the government in areas it holds similar views, in other words, there is collusion on a political level. Anyone not in lockstep with that view or narrative risks being smeared, tarred and feathered. Just as Fjordman.

The World Press Freedom Index ranked Norway third in the world but warned of a “deep and disturbing” decline in media freedom around the globe.