The crisis center operator was named Zakaria, I would guess, an Israel hating muslim.

As Europe becomes more islamized, we can expect this kind of behaviour becoming the norm. It’s why many Jews throughout Europe are against the importation of Muslims, and why Israel is worried about the eventual slipping of Europe from the realm of free states. 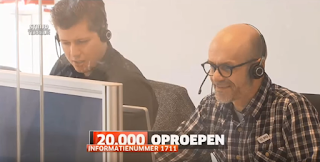 From The New Antisemite (original story at Joods Actueel):

At least two Israelis were injured in the terror attacks in Brussels. Israel would like to fly them home and so in order to release them from the hospital, a Jewish volunteer called up the Crisis Center set up by the Ministry for Internal Affairs to ask about the procedure.

He was told that the Israeli victims could not be sent back to Israel, they can only be sent back to Palestine. The family of the victim is shocked and says that “It’s just like Iran here”.

This is not the first time an emergency responder decides a Jewish medical emergency is a good reason to preach for Palestine. During the Gaza war, a doctor refused to treat a 90 year old Jewish woman, and suggested to “send her to Gaza for a few hours.”

Here is the English transcript of the phone call, along with audio, which tool place Wednesday afternoon:
Transcript here.
NOTE: This is something that the promoters of the anti-Israel meme of the Jews / Zionists controlling muslim immigration vis-a-vis multiculturalism, for whatever their reasons, fail to take into consideration. This (the Islamization of Europe) all works against Jewish communities throughout the West, as well as against future Israel social and economic relations.
UPDATE APOLOGY H/T: Malca:

IPG profoundly regrets that an employee, when answering a call to the crisis centre of the Ministry of Internal Affairs, systematically used “Palestine” to indicate the country of Israel, and by doing so sought confrontation with a Jewish volunteer.

IPG distances itself fully from this inappropriate behaviour.

Being a strictly isolated incident, it goes entirely against all IPG values and rules of conduct.

Moreover, the incident sharply contrasts with the excelling dedication shown by our crisis centre teams who have answered thousands of calls, day and night. We are very grateful for their commitment.

Given the severity of the facts the collaboration with the person concerned has been terminated with immediate effect.

IPG apologizes to all who may have been offended by the acts of our former employee.

IPG would like to take this opportunity to express our deepest sympathy to all the victims of the tragic events of last week in Brussels, as well as their relatives.

NOTE II: What about disciplinary action against the operator?