Over at the Gates of Vienna, Baron Bodissey and Dymphna have been following the comments of someone who goes by the name of ”Muslim”. It’s a very innocuous handle, but to the point, the commenter wants them to know that he’s a practitioner of the Islamic creed.

The method he (or she) employs is a sophisticated mixture of sophistry and accentuated politeness, feigned ignorance when cornered and outright lying (taqiyya) accompanied with a complete disappearing act only to resurface elsewhere to continue the parrying.

I have come across similar advances from the practitioners of what GOV now refers to as ‘Maqamists‘. After engaging with the back and forth comments, one quickly discerns the disingenuousness in the responses of the person you’re debating. You can’t continue, knowing that anything you say will be met with all of the above just mentioned, so you bid them farewell and delete their attempts at swaying your readership, and most importantly, you block them.

Most of the West’s battles with Muslims pursuing civilizational-jihad will not be on the battlefield with rifles and bullets, but with computers and keypads. This kind of verbal warfare is also encountered in any of the ”dialogue between faiths” events. Many a good and honest clergymen have been taken in by the supposed sincerity of the Muslim practitioner of maqama, it’s too bad they haven’t understood the method being employed against them, it’s entirely dishonest in intent, and entirely Islamic in nature.

Bookmark Baron Bodissey’s piece, study it, and most importantly use it in your own exchanges with these professional dawa propagandists. 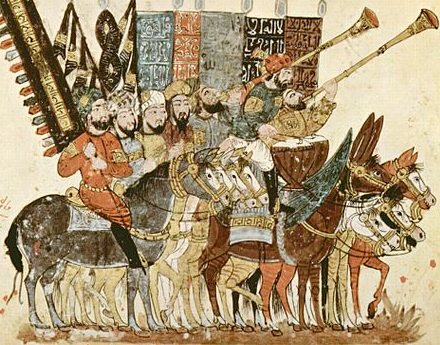 In medieval Arabic literature, maqama were collections of tales recounted in a mixture of poetry and prose. Each vignette described the accomplishments of a sly trickster who hoodwinked his adversaries using deceptive rhetoric.

In recent days here at Gates of Vienna we’ve had our own silver-tongued Arab dazzling us with his maqama in comments on various posts. Dubbing himself “Muslim”, he left a series of reasonable-sounding, carefully balanced comments whose style verged on the unctuous. When anyone responded to him, he offered additional soothing bromides with equal verbal virtuosity.

I knew that I would eventually have to ban Muslim, but first I needed to demonstrate to my own satisfaction that he was not commenting in good faith, but was in fact a maqama troll.

My expectation was that a sufficiently skilled reply to him would elicit no response. Sure enough, when he mentioned the Crusades, I asked him a question (about how Syria, Palestine, and Egypt became Muslim after formerly being Christian) and received no reply.

That was strike one, and I was only going to allow him two strikes. I was eventually presented with another opportunity when he left this comment:

The proselytizing violence is an overplayed stereotype, which does not reflect the reality of roughly 20% plus of humanity.

Anyone can pick a large enough population, apply constant monitoring & then highlight fringe behaviour as representing the norm to the ignorant or agenda-driven echo chambers. [emphasis added]

By including the highlighted statement he had made himself vulnerable to fact-based refutation, because violence is deeply embedded in the scripture and laws of Islam, and is in fact the major technique employed to convert non-Muslims to Islam — or convert them into milch-cows for their Islamic masters.

First I told him this:

I have asked you reasonable questions previously and received no answers. If you fail to answer the questions detailed below, I shall assume that you are a troll, and any subsequent comments by you will be deleted.

And then I presented a carefully prepared rebuttal, drawing on the groundbreaking work of Major Stephen Coughlin to lay out the basis for jihad in Islamic scripture, tradition, and law:

You say: “The proselytizing violence is an overplayed stereotype”.

There is a text of Islamic law that defines jihad. In full, its title is ‘Umdat al-salik wa ’uddat al-nasik, or The reliance of the traveller and tools of the worshipper. It is commonly referred to as Reliance of the Traveller when cited in English.

Book O, “Justice”, § 9 begins the section on jihad. Jihad is similarly defined in Book X “The Book of Jihad” from Ibn Rushd’s book The Distinguished Jurist, and in Book XIII “Siyar (Relations with non-Muslims)” of the Hidayah:

Jihad means to war against non-Muslims and it is etymologically derived from the word mujahada signifying war to establish the religion. And it is the lesser jihad.

It goes on to explain that the greater jihad is the struggle for the spiritual self. However, it also tells us that the hadith that is weak or false, depending on what authority is referenced, so is not authoritative. When the book refers to the greater and lesser jihad, it indicates that it is not a part of the law of jihad.

NOTE: Remember folks, the whole intent of the Maqamaist is not to sway you (more the victory for him if he does) but to sway those fence sitters watching the debate on the side. Appearing above reproach in style of manner, he hopes to win sympathy for being the victim of any heated rhetoric (that might ensue due to his tactics), as well as taking up endless amounts of time from the opponent, to the point of wearing him down through attrition. This might save you endless hours of your time best used elsewhere in fighting the scourge that is Islam. Never, ever underestimate your enemy.